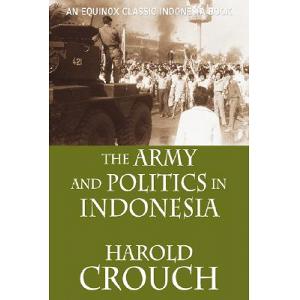 The Army and Politics in Indonesia (Revised Edition)

A comprehensive description of the Indonesian Army's history of political involvement. Crouch's incredible knowledge of so many facets of intrigue and manipulation, of names, dates, enemies and friends, and specific circumstances under which each attempted coup and counter effort was made if phenomenal. His attention to the supporting literature and his own personal experiences in-country certainly would indicate that Mr. Crouch is a - if not the - leading expert in this complex and bewildering subject. Highly recommended. - Perspective: Reviews of New Books in Political Science

The author has produced the most thorough and balanced account of contemporary Indonesian politics yet to appear in print. - Canadian Journal of Political Science

A valuable contribution to our knowledge of modern Indonesia. - Journal of Southeast Asian Studies

In this highly-respected work, Harold Crouch analyzes the role of the Indonesian Army in that country's politics, putting special emphasis on the Sukarno years, the gradual takeover of power by the military, and the nature of Suharto's New Order government. The Army and Politics in Indonesia is now updated with a new preface and epilogue that expands the book's coverage to the 1980s.

HAROLD CROUCH is a Senior Fellow in the Department of Political and Social Change, Research School of Pacific and Asian Studies, Australian National University where his research is concerned with Southeast Asian politics. He taught political science at the University of Indonesia in Jakarta from 1968 to 1971 and in the Department of Political Science at the National University of Malaysia from 1976 to 1990.