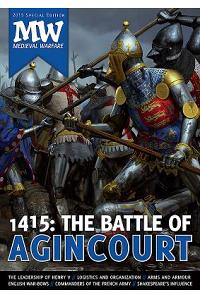 The 2015 Medieval Warfare Special issue is entirely dedicated - all 84 pages - to the Battle of Agincourt in 1415. It's like a normal issue, except it'll have more pages, more articles, more maps and more illustrations Medieval Warfare Special 2015: 1415: The Battle of Agincourt with: - Brian Todd Carey - Historical introduction
- Michael Jones - Henry V as military commander
- Adam Chapman - Recruitment and organisation of the English Army
- Hugh Soar - The war bow
- Anne Curry - The Battle of Agincourt
- Jean-Claude Brunner - Too many dukes: The French commanders
- Bertrand Scherb - Recruitment and organization of the French army
- Tobias Capwell - French and English weapons and armour/equipment
- Nils Visser - The source: Agincourt on paper
- Stephen Cooper - Shakespeare and the myth of Agincourt
- Christophe Gilliot - A 'gens d'armes' at Agincourt
- Stephen Bennett - The aftermath