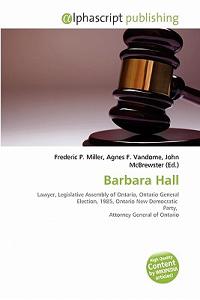 Please note that the content of this book primarily consists of articles available from Wikipedia or other free sources online. Barbara Hall (born 1946) is a Canadian lawyer, public servant and former politician. She was the 61st mayor of Toronto, the last to run before amalgamation. She was elected mayor of the pre-amalgamation City of Toronto in 1994, and held office until December 31, 1997. On November 28, 2005, Hall was appointed Chief Commissioner of the Ontario Human Rights Commission for a three-year term. Barbara Hall attended the University of Victoria in British Columbia but left two credits short of a degree to pursue community activism. She then moved to Nova Scotia to work with black families in rural areas." She worked in the small Nova Scotia community of Three Mile Plains as one of the first members of the Company of Young Canadians.