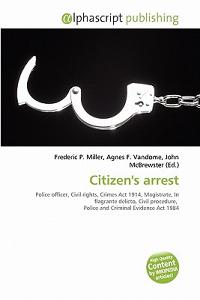 Publication Date: 21 January 2011
High Quality Content by WIKIPEDIA articles A citizen's arrest is an arrest made by a person who is not acting as a sworn law-enforcement official. In common law jurisdictions, the practice dates back to medieval Britain and the English common law, in which sheriffs encouraged ordinary citizens to help apprehend law breakers. Despite the practice's name, in most countries, the arresting person is usually designated as a person with arrest powers, who need not be a citizen of the jurisdiction or country in which he or she is acting.