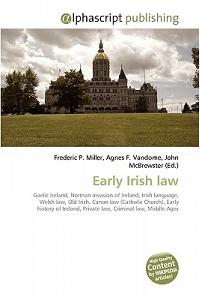 Early Irish law refers to the statutes that governed everyday life and politics in Ireland during the Gaelic period. They were partially eclipsed by the Norman invasion of 1169, but underwent a resurgence in the 13th century, and survived in parallel to English law over the majority of the island until the 17th century. "Early Irish Law" was often, although not universally, referred to within the law texts as "Fenechas," the law of the Feni, or the freemen of Ireland. They are also referred to as "Brehon Law." The word "Brehon" is a derivation of breitheamh (earlier brithem), the Irish word for a judge. The laws were originally held in an oral tradition, and are comparable to Welsh law. They were recorded in the Old Irish period (ca. 600-900 AD) and the texts reflect the traditional laws of pre-Christian Ireland mixed with Christian influence and juristic innovation. These secular laws existed in parallel, and occasionally in conflict, with Canon law throughout the early Christian period.