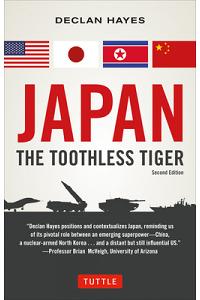 East Asia: the world's most dangerous flash point brought to life by a true insider. Once a political and economic powerhouse, Japan now finds herself severely weakened and in a very troubling situation with a belligerent and expansionist China on one side and a still-influential but distant and waning America on the other. For years Japan has adhered to its commitment to a strictly defensive military, while China, once the "sick man of Asia" rapidly expands its military--probing and pushing its neighbors to their limits. As the pendulum of geopolitical power inexorably swings back to China, Japan faces several dilemmas. What choices it makes will prove vital not only for its survival, but for the entire Pacific region. Declan Hayes draws on his experiences teaching in Japan for over a decade at Tokyo's Sophia University to give an insider's perspective on this topic, placing the Pacific situation in a political context. Hemmed in by mounting tensions with China over the Senkaku / Diaoyu Islands and facing nuclear threats from North Korea, what should Japan do? Should she rearm? Should she get the bomb? What are the consequences of rearming, or not rearming? Professor Hayes outlines a way forward by presenting how and why Japan must develop a more sophisticated approach to China, Russia and the two Koreas to address growing threats to her security and national interests. Not merely an analysis of Japan and China, this book covers the entire region and all of its players. Topics include: In this second edition, Professor Hayes includes a preface with updates about recent developments in Asia. As the permanent interests of China and Japan, East Asia's main protagonists, do not and cannot change, Japan: The Toothless Tiger is even more relevant now than when it was first published.