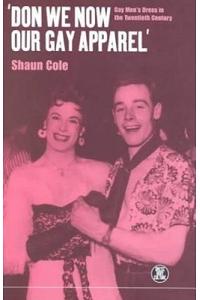 'don We Now Our Gay Apparel: Gay Men's Dress in the Twentieth Century

From the New Edwardians and muscle boys to Radical Drag and Genderfuck, gay men's dress has had a profound impact on fashion. However, it is easy to forget that, with few exceptions, gay men earlier in the century took great pains to conceal their sexual identity. Men such as Quentin Crisp, while highly influential, were far from the norm. Most gay men resorted to a number of subtle dress codes to identify themselves to other gay men -- from Oscar Wilde's famous green carnation, which was still being worn in the 1930s, through to suede shoes.

Beginning with a look at the subcultural world of gay men in the early part of this century -- particularly in New York and London -- this fascinating book analyzes the trends in dress adopted by gay men as well as the challenge gay style has made to mainstream men's fashion. The importance of dress choice to the formation of sexual identity is highlighted, as is gay influence on punk and the fashion industry as a whole. The rise of new dress choices in the wake of gay liberation is analyzed with particular emphasis on the masculinization of gay dress. The importance of the body to gay culture is addressed, from the physique magazines of the 1950s, through to tattooing and body piercing, and their origins in the S&M scene.

Anyone interested in gay culture or the history of dress will find this book to be essential reading.