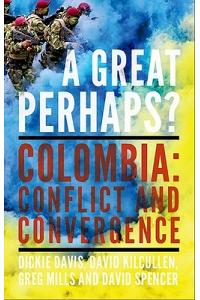 Or   1698 PEC Points
Currently Unavailable
If stock becomes available, email me at:

No country has managed as rapid and positive a turnaround in governance and security conditions this century than Colombia. In 1999, rebels of the FARC and ELN were, literally, at the gates of Bogota, Colombian known more for rapacious corruption, weak government, drug smuggling and criminality, a country synonymous with the antics of Pablo Escobar. Fifteen years later the guerrillas and the government are at the peace table in Havana, the economy has been a top performer in Latin America, and drugs are no longer the pervasive scourge they once were. To date, however, there has been no comprehensive examination of the different elements employed by government to combat the guerrillas, to win local and international political and military support, extend government authority to the 75 percent of the countryside where it was seldom felt, and to turn the Colombian economy into a success resembling the high-growth examples of Southeast Asia. How the Colombians did all of this is the subject of this book by four international specialists with untrammelled policy and practical expertise in counter-insurgency campaigns in Colombia and elsewhere, bringing a unique comparative perspective. Based on field-work in Colombia's regions, the study provides a history to the conflict, compares it to other historical and contemporary case-studies, examines the war from the perspective of the government and the guerrilla, delves into the development of special Colombian capabilities notably in intelligence and the use of airpower and special forces, and explains the economic dimension in terms both of historical exclusion and ongoing attempts at growth and inclusion. Finally, it concludes with an assessment on the country's prospects: can the combination of improved security, a flourishing economy and the peace process offer an opportunity to finally translate Colombia from, in Gabriel Garcia Marquez's words, 'a great perhaps' into something more permanent?