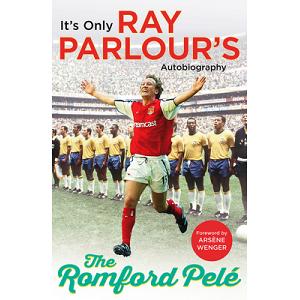 The Romford Pelé: It's Only Ray Parlour's Autobiography

Ray Parlour is an Arsenal legend. During his 16-year career he won 3 Premier League titles, 4 FA Cups and the UEFA Cup. One of the most underrated players of his generation, he was also part of Arsenal's famous Invincible team of 2003/4, which went the entire Premier League season unbeaten. He is now a regular pundit for TalkSport and Sky Sports. He enjoys a short back and sides.

'Maybe I wasn't the most glamorous player. If some people didn't rate me that highly I don't mind that either. I always say: you can't win the league with ten Thierry Henrys or ten Tony Adams. Probably my best attribute is I never knew when I was beaten. I gave every ounce every game'

Nicknamed the Romford Pele by his teammate Marc Overmars, Ray Parlour devoted his career to the Gunners. Over 12 action-packed years, from a trainee scrubbing the boots of the first XI, to celebrating over 330 Premier League appearances to become the most capped player in the club's history, Parlour endeared himself to the Arsenal faithful with his down-to-earth Essex charm, his mischievous sense of humour and his hard-working performances on the pitch. Often in the shadows of his flashier teammates, he didn't have the flair of a Bergkhamp or a Pires, but he worked tirelessly to become an integral part of many of George Graham's and Arsène Wenger's greatest sides, including the Invincibles of 2004.


In this wonderfully funny and candid autobiography, Ray looks back fondly over his life and career during a golden age of the beautiful game. From the all-day drinking sessions of the Tony Adams years, and that incident with the prawn crackers in Hong Kong, to the antics he got up to with his more cultured continental teammates, teaching Thierry Henry cockney rhyming slang and Dennis Bergkamp how to play golf, this is the definitive portrait of a man who was loved as much for his personality in the dressing room as well his often underrated talent. It is also the story of a career that spanned enormous change in British football, the like of which may not be seen again.