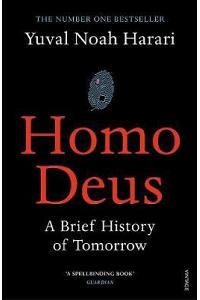 can't wait to read it up! thankyou for sending this one as soon as possible also It came with a good condition!!

Absolute eye-opener, you gotta read this to face the future ahead.

This is the best reason to learn history: not in order to predict the future, but to free yourself of the past and imagine alternative destinies. Of course this is not total freedom – we cannot avoid being shaped by the past. But some freedom is better than none.

This book truly described how sophisticated our brains are. Recommended!

Between 4−5 stars rating,  08 January 2018
This might be the best "humanity" manifesto of the year!
By: Conrado Cornelius

For many years, the analysis and forecast of humanity's history has been heavily dominated and confined within the study of its socio-political reality. This is evident in the work of Samuel Huntington "Clash of Civilization" and to be further, allegedly, revised by his student Francis Fukuyama in his seminal work "The Origins of Political Order." Unlike its predecesors, Harari has attempted to cover all areas of human life, and not being occupied exclusively with only its socio-political reality. Harari for instance had highlighted problems like obesity and famine, artificial intelligence, etc. And what's important to note from this book is that Harari... See More

sees a historical development by highlighting humanity's ability in tackling most of its problems with recourse to technology and at the same time showing why other "Deistic" alternatives were inadequate; for these problems are technical problems, thus requiring a technical solution. For skeptics and pessimists of historical development--Foucault, for example--would find themselves a worthy opponent.
0 Comments
1 2 > >|
Showing 1 to 5 of 9 (2 Pages)
Are you sure you want to delete this review?
Easy, Secure
Online Shopping