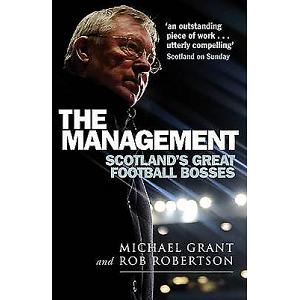 In exclusive interviews with Sir Alex Ferguson, George Graham, Jim McLean, Eddie Turnbull, Graeme Souness, Gordon Strachan, Kenny Dalglish, David Moyes, Alex McLeish and Walter Smith, as well as a host of others, Michael Grant and Rob Robertson reveal the huge contribution Scots managers have made to the world game. The first book of its kind, this clever, original, and brilliantly realised analysis presents fascinating accounts of each man, profiling their history, the clubs they've served, their individual strengths and weaknesses, and their impact on the game itself. It is a deeply researched and compelling work which also presents illuminating material on legendary names from the past, such as Sir Matt Busby, Jock Stein and Bill Shankly, while exploring the real personalities of the Scottish managerial game, men like Jim Leishman, John Lambie and Steve Paterson who brought both laughter and tragedy to the dressing room.With a special section on Scots who managed the Old Firm, it also shows for the first time how Scottish coaches have spread their football gospel all round the world and why places such as Brazil, Italy and the Czech Republic have them to thank for driving forward their domestic game. Insightful, measured, revealing and utterly unique, this is a must-read for football fans the world over.