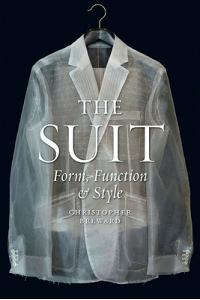 The Suit: Form, Function and Style

Or   1158 PEC Points
Currently Unavailable
If stock becomes available, email me at:

Be as in love with your jeans, sweatpants, or flannels as you want, it's hard to refute the sumptuous feel of a finely tailored suit--as well as the statement of power that comes with it. For over a century the suit has dominated wardrobes, its simple form making it the go-to attire for boardrooms, churches, or cocktail bars--anywhere one wants to make an impression. But this ubiquity has allowed us to take the suit's history for granted, and its complex construction, symbolic power, and many shifting meanings have been lost to all but the most devout sartorialists.

In The Suit, Christopher Breward unstitches the story of our most familiar garment. He shows how its emergence at the end of the seventeenth century reflects important political rivalries and the rise of modern democratic society. He follows the development of technologies in the textile industry and shows how they converge on the suit as an ideal template of modern fashion, which he follows across the globe--to South and East Asia especially--where the suit became an icon of Western civilization. The quintessential emblem of conformity and the status quo, the suit ironically became, as Breward unveils, the perfect vehicle for artists, musicians, and social revolutionaries to symbolically undermine hegemonic culture, twisting and tearing the suit into political statements. Looking at the suit's adoption by women, Breward goes on to discuss the ways it signals and engages gender. He closes by looking at the suit's apparent decline--woe the tyranny of business casual --and questioning its survival in the twenty-first century.

Beautifully illustrated and written with the authority a Zegna or Armani itself commands, The Suit offers new perspectives on this familiar--yet special--garment.