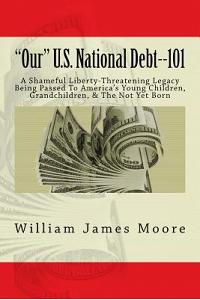 "Our" U.S. National Debt--101: A Shameful Liberty-Threatening Legacy Being Passed To America's Young Children, Grandchildren, & The Not Yet Born

"The American Republic will endure until the day Congress discovers that it can bribe the public with the public's money." -Alexis De Tocqueville (1805-1859) = = = This writing is about an out-of-control human-created menace. A rapidly growing peril from within. A hazard in large measure born out of, and continuing to feed upon, wide-spread ignorance, apathy, complacency, denial, irresponsibility, and greed. A threat not defeatable without extremely difficult and courageous decisions. Nor, without enduring sacrifices beyond the thus far comprehension of the vast majority of Americans living today. Especially those absorbed in the delusions of political correctness and a make believe world where one is never offended or otherwise exposed to the free speech of others. And in denial or ignorance of the fact that nothing is truly "free"-because someone, somewhere, and somehow, ultimately pays. More specifically, this is about an inescapable obligation of inconceivable magnitude-the U.S. National Debt. One that, as of March 15, 2018, exceeded $21 trillion ($21,000,000,000,000)-a little more than six months after first surpassing a likewise staggering threshold of $20 trillion. A debt now greater than the entire U.S. Gross National Product (GDP)-the total value of all of the country's goods and services-forecasted for Fiscal Year 2018. An unsustainable nation-destructive legacy of economic burden that continues to be enabled by those willing-through ignorance or intent-to kick-the-can of responsibility and consequences down the road. As the futures of America's children, grandchildren, and generations not yet born, are shamefully spent and their livelihood and liberty placed in critical jeopardy. = = = "The trouble with Socialism is that eventually you run out of other people's money." -Margaret Thatcher (1925-2013), Prime Minister of the United Kingdom from 1979-1990 "If a nation expects to be ignorant and free, in a state of civilization, it expects what never was and never will be." -Thomas Jefferson (1743-1826), an American Founding Father; principal author of the Declaration of Independence; and third U.S. President from 1801-1809.