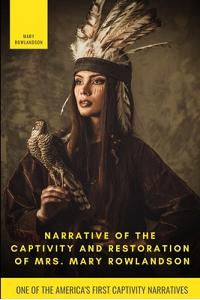 Narrative of the Captivity and Restoration of Mrs. Mary Rowlandson

Mary (White) Rowlandson was a colonial American woman who was captured during an attack by Native Americans during King Philip's War and held ransom for 11 weeks and 5 days. After being released, she wrote A Narrative of the Captivity and Restoration of Mrs. Mary Rowlandson, also known as The Sovereignty and Goodness of God. It is a work in the literary genre of captivity narratives. It is considered to be one of America's first bestsellers, four editions appearing in 1682 when it was first published. Plot summary: On February 10, 1676, the settlement of Lancaster, in the Massachusetts Bay Colony, was attacked by Native Americans. The Native Americans burned down houses and opened fire on the British settlers, killing several of them and wounding more. They took many of the survivors captive, including Mary Rowlandson and her three children. Mary and her youngest child are among the injured, while others of her family, including her brother-in-law, are killed. The Native Americans lead the captured survivors from their settlement into the wilderness. Rowlandson and her youngest, Sarah are allowed to stay together, but her two oldest, Joseph and Mary, are separated. After spending a night in a nearby town, the Native Americans with their captives head further into the wilderness. Being injured, the journey is difficult for Rowlandson and her daughter. They reach an Indian settlement called Wenimesset, where Rowlandson meets another captive named Robert Pepper who tries to help the new captives. After staying in Wenimesset for about a week, Rowlandson's injured daughter, Sarah, dies. Rowlandson is sold to another Indian who is related to King Philip by marriage. They bury Rowlandson's dead daughter, and she is allowed to visit her oldest daughter Mary who is also being held in Wenimesset, and her oldest son who is allowed to visit from a nearby Indian settlement. The Indians give Rowlandson a Bible in which she finds a great deal of hope..