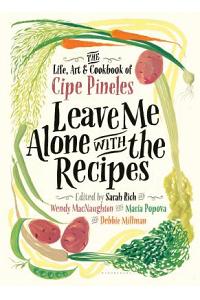 Leave Me Alone with the Recipes: The Life, Art, and Cookbook of Cipe Pineles

The newly discovered illustrated recipes of wildly influential yet unsung designer Cipe Pineles, introducing her delectable work in food and art to a new generation.

Not long ago, Sarah Rich and Wendy MacNaughton discovered a painted manuscript at an antiquarian book fair that drew them in like magnets: it displayed a vibrant painting of hot pink beets and a hand-lettered recipe for borscht written in script so full of life, it was hard to believe it was more than sixty-five years old.

It was the work of one of the most influential graphic designers of the twentieth century--Cipe (pronounced "C. P.") Pineles, the first female art director at Cond Nast, whose impact lives on in the work of Maira Kalman, Julia Rothman, and many others. Completed in 1945, it was a keepsake of her connection to her childhood's Eastern European food--she called it Leave Me Alone with the Recipes. For Wendy and Sarah, it was a talisman of a woman they had not known was their idol: a strong, independent spirit whose rich archive--of drawings, recipes, diaries, and letters to family and friends--led them into a dazzling history of mid-century design, art, food, New York City society, and culture.

They teamed up with Maria Popova of Brain Pickings and Debbie Millman of Design Matters, along with contributors Mimi Sheraton, Steven Heller, Paula Scher, and Maira Kalman, to present Cipe Pineles's life and work as it should be presented--in glorious color. With Pineles's illustrated cookbook and a section of updated recipes as its centerpiece, this gorgeous volume will delight foodies and design devotees alike.