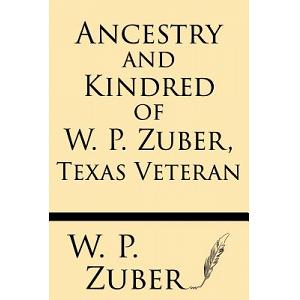 ANCESTRY AND KINDRED
of W. P. Zuber
Excerpt Tracing my ancestry, I give precedence to the female lines; that, when I reach any male ancestor, I may adhere to the male line so far as it points toward myself: and I mention my female ancestors by their maiden names. I, William Physick Zuber, was born in Twiggs County, Georgia; July 6, 1820. My parents were Abraham Zuber jr. and Mary Ann Mann. My mother, Mary Ann Mann, was born in Edgefield District, South Carolina; September 18, 1793. Her parents were Thomas Mann and Ann Deshazo. My maternal grand-mother, Ann Deshazo, was born in North Carolina; about the year 1765. Her parents were Robert Deshazo and Mollie Trevelian. My mother's maternal grand-mother, Mollie Trevelian, was born in Virginia, about the year 1732. One of her parents, I know not which, was born in Scotland, the other in Ireland. When yet young, they migrated from their respective native countries to Virginia, where they married. Later, they moved, with their daughter Mollie and other children, to North Carolina: and there Mollie married Robert Deshazo. AN EPISODE Mollie Trevelian Deshazo had an elder brother, John Trevelian; who, as a volunteer in the Virginia Militia, participated in the campaign against Fort Du Quesne, in 1755; fought in the battle of Monongahela, - remembered as General Braddock's Defeat, - July 8th, of that year. In that battle, he was captured by the French: and thence he was conducted, a prisoner, to Canada. How long he was held as a prisoner, I am not informed: but he was finally set at liberty, - pennyless in a strange country, among a people whose language he did not understand. There were only two ways by which he could return home. One was through a wilderness, which was infested by savages, who would surely kill him if he attempted to traverse it alone: and he could not learn of any body of adventurers whom he could accompany on such a trip. The other way was to go by sea: but he had not money with which to pay his passage; and he could obtain employment only for short terms between intervals, and at low wages. But he worked when he could obtain employment at any price; hoping, by rigid economy, to save money enough to pay his way home. Finally, after an absence of four or five years, he made the trip home; whether by land or by sea, I am not informed. He owned a good home, which was well furnished for that period; which his friends had not disposed of, though they believed that he had been killed in the battle in which he was captured. He first thought that he would marry and live on his homestead: but a change of conditions determined him to do otherwise. He sold his possessions in Virginia; and went to North Carolina, whither his parents had... ------------------------------------------------------------------------------------------------------------------------------------------ Windham Press is committed to bringing the lost cultural heritage of ages past into the 21st century through high-quality reproductions of original, classic printed works at affordable prices. This book has been carefully crafted to utilize the original images of antique books rather than error-prone OCR text. This also preserves the work of the original typesetters of these classics, unknown craftsmen who laid out the text, often by hand, of each and every page you will read. Their subtle art involving judgment and interaction with the text is in many ways superior and more human than the mechanical methods utilized today, and gave each book a unique, hand-crafted feel in its text that connected the reader organically to the art of bindery and book-making. We think these benefits are worth the occasional imperfection resulting from the age of these books at the time of scanning, and their vintage feel provides a connection to the past that goes beyond the mere words of the text.