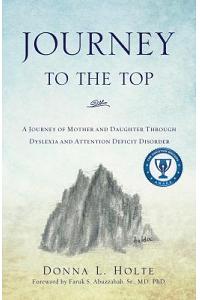 Journey to the Top

"There are two things you can do when you come to a mountain: climb it or go around it. The second is the easiest... but you miss the view from the top " (Author Unknown) The idea for this book came as I was thinking back on my daughter Sarah's life and the "Sarah" that I wanted her soon-to-be husband to know. As I was putting together a scrapbook for him and re-living all of the fun memories, I kept thinking, but there is so much more to tell. It was then I decided that I needed to share the painful memories as well: those of Sarah's many struggles with dyslexia and attention deficit disorder. However, I would share the pain only to tell the story of the VICTORY through faith as the final outcome in Sarah's life This book is that story. It is the story of a painful, yet ultimately victorious, journey to the top-a journey of mother and daughter, with God, through dyslexia and attention deficit disorder. Donna Holte lives in Minneapolis, Minnesota with her husband Richard. They have three married daughters and four grandchildren. journey.to.top@gmail.com Dr. Faruk Abuzzahab graduated from the American University of Beirut, Lebanon, and completed psychiatric residency training at the Henry Phipps Psychiatric Clinic, Johns Hopkins Hospital, Baltimore, Maryland. In addition, he earned a PhD degree at the University of Minnesota, Minneapolis, Minnesota, with a major in psychiatry and minor in psychology. Since 1962, Dr. Abuzzahab has been on the faculty of the University of Minnesota in the Department of Psychiatry, Pharmacology, Family Practice and Community Health. In 1973 he founded Clinical Psychopharmacology Consultants, P.A., for clinical investigations of psychoactive medications. In 1998 he extended his psychopharmacology interest to preventing the aging of the brain by starting International Anti-Aging Medical Institute, P.A.