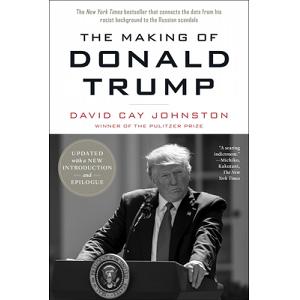 The Making of Donald Trump

THE NEW YORK TIMES BESTSELLER that connects the dots from Donald Trump's racist background to the Russian scandals "A searing indictment." -- Michiko Kakutani, The New York Times "Johnston has given us this year's must-read Trump book." -- Lawrence O'Donnell, host of MSNBC's The Last Word with Lawrence O'Donnell The international bestseller that brought Trump's long history of racism, mafia ties, and shady business dealings into the limelight. Now with a New Introduction and Epilogue. Pulitzer Prize-winning investigative journalist David Cay Johnston, who had spent thirty years chronicling Donald Trump for the New York Times and other leading newspapers, takes readers from the origins of the Trump family fortune--his grandfather's Yukon bordellos during the Gold Rush--to his tumultuous gambling and real estate dealings in New York and Atlantic City, all the way to his election as president of the United States, giving us a deeply researched and shockingly full picture of one of the most controversial figures of our time. "Provides useful, vigorously reported overviews of Mr. Trump's life and career ... Mr. Johnston, who has followed the real estate impresario for nearly three decades, offers a searing indictment of his business practices and creative accounting."--Michiko Kakutani, The New York Times "David Cay Johnston has given us this year's must-read Trump book."--Lawrence O'Donnell, MSNBC's The Last Word "Johnston devastatingly covers ground he broke open as a reporter on the Trump beat in Philadelphia and at The New York Times...The best of investigative reporting is brought to bear on a man who could potentially lead the free world."--USA Today "Carefully fleshes out the details of Trump's known biography...with solid documentation."--Tampa Bay Times "Johnston's case is unassailable and eye-opening." -- The Nation