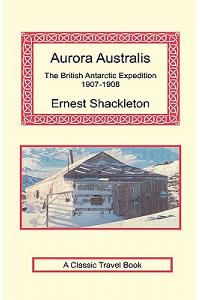 In an age when it is fashionable to forget the achievements of the great explorers of the heroic age, comes the timely rebirth of this legendary book, penned by a band of brave British men whose wit and wisdom blazes like a sun beside todays lesser stars. In 1907 Ernest Shackleton led the Nimrod Expedition to Antarctica. He established a base camp at Cape Royds on Ross Island and built a wooden hut to serve as headquarters. Because of his prior experience with Robert Scotts first expedition, Shackleton knew the sunless winter months spent in these cramped quarters would test the morale of his men, so he set several of them to work writing and printing the first book ever produced on the Antarctic continent. Containing fact, fiction, humour, prose and poetry, Aurora Australis, is one of the most extraordinary travel books ever written. It contains stories about the Antarctic wildlife, describes the harsh conditions suffered by the explorers and recounts their journey to the top of Mount Erebus, a nearby active volcano surrounded by ice. An estimated one hundred copies were originally Printed at the Sign of the Penguin by these gifted authors, the result of which is a unique symbol of the heroic age of exploration. Because of its rarity a first edition of Aurora Australis recently sold for more than $100,000. This special edition is being produced in an effort to raise awareness of the need to conserve the four huts used by the British explorers, along with the remarkable memorabilia and icebound supplies preserved within their frozen walls. Having endured nearly a century of harsh weather, these huts still symbolise the nobler aspects of human nature which took these talented and brave men to Antarctica. The buildings are now considered to be some of the most endangered historic structures in the world.