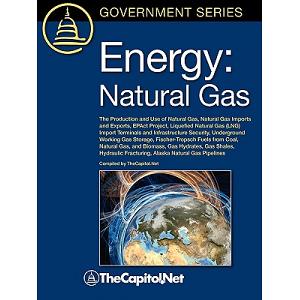 "Energy: Natural Gas," part of the Government Series from TheCapitol.Net

The main ingredient in natural gas is methane, a gas (or compound) composed of one carbon atom and four hydrogen atoms. Millions of years ago, the remains of plants and animals (diatoms) decayed and built up in thick layers. This decayed matter from plants and animals is called organic material-it was once alive. Over time, the sand and silt changed to rock, covered the organic material, and trapped it beneath the rock. Pressure and heat changed some of this organic material into coal, some into oil (petroleum), and some into natural gas-tiny bubbles of odorless gas.

Discussions of US and global energy supply refer to oil, natural gas, and coal using several terms that may be unfamiliar to some. The terms used to describe different types of fossil fuels have technically precise definitions, and misunderstanding or misuse of these terms may lead to errors and confusion in estimating energy available or making comparisons among fuels, regions, or nations.

Natural gas provided about 22% of US energy requirements in 2007. It will continue to be a major element of the overall US energy market for the foreseeable future. Given its environmental advantages, it will likely maintain an important market share in the growing electricity generation applications, along with other clean power sources.

In 2008, the US natural gas market experienced a tumultuous year, and market forces appeared to guide consumers, producers and investors through rapidly changing circumstances. Natural gas continues to be a major fuel supply for the US, supplying about 24% of total energy in 2008.

In the past, the oil and gas industry considered gas locked in tight, impermeable shale uneconomical to produce. However, advances in directional well drilling and reservoir stimulation have dramatically increased gas production from unconventional shales. The United States Geological Survey estimates that 200 trillion cubic feet of natural gas may be technically recoverable from these shales. Recent high natural gas prices have also stimulated interest in developing gas shales. Although natural gas prices fell dramatically in 2009, there is an expectation that the demand for natural gas will increase. Developing these shales comes with some controversy, though.

Solid gas hydrates are a potentially huge resource of natural gas for the United States. The U.S. Geological Survey estimated that there are about 85 trillion cubic feet (TCF) of technically recoverable gas hydrates in northern Alaska. The Minerals Management Service estimated a mean value of 21,000 TCF of in-place gas hydrates in the Gulf of Mexico. By comparison, total U.S. natural gas consumption is about 23 TCF annually.

As the price of crude oil sets a record high, liquid transportation fuels synthesized from coal, natural gas, and biomass are proposed as one solution to reducing dependency on imported petroleum and strained refinery capacity. The technology to do so developed from processes that directly and indirectly convert coal into liquid fuel.

As Congress seeks to address energy security issues, the increasing importation of liquefied natural gas (LNG) is also a matter deserving careful attention. In 2007, LNG imports reached a record high and plans are to increase this fuel source.