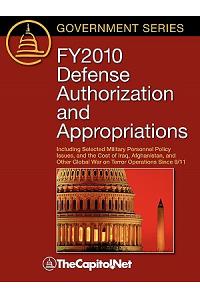 Fy2010 Defense Authorization and Appropriations: Including Selected Military Personnel Policy Issues, and the Cost of Iraq, Afghanistan, and Other Glo

For the Department of Defense (DOD) in FY2010, the Administration requested a total of $663.8 billion in discretionary budget authority. This includes $533.8 billion for the so-called "base budget"--all DOD activities other than combat operations--and $130.0 billion for "overseas contingency operations," including operations in Iraq and Afghanistan. The Administration also requested $75.9 billion in supplemental DOD appropriations for FY2009 to cover war costs. The Administration's DOD request, made public May 7, 2009, incorporated Defense Secretary Robert Gates' April 6 recommendations to curtail funding for several major weapons programs focused on conventional warfare.

Each year, the Senate and House Armed Services Committees report their respective versions of the National Defense Authorization Act (NDAA). These bills contain numerous provisions that affect military personnel, retirees and their family members. Provisions in one version are often not included in another; are treated differently; or, in certain cases, are identical. Following passage of these bills by the respective legislative bodies, a Conference Committee is typically convened to resolve the various differences between the House and Senate versions.

As the ninth year of operations since the 9/11 attacks begins this October, and troops are being withdrawn in Iraq and increased in Afghanistan, the cost of war is a major concern including the total amount appropriated, the amount for each operation, average monthly spending rates, and the scope and duration of future costs.

- How to Read and Decipher the Department of Defense (DoD) Budget: A Primer for Defense Industry Professionals, ISBN: 1587330741

5. Other Resources For a complete Table of Contents, see www.TheDefenseBudget.com