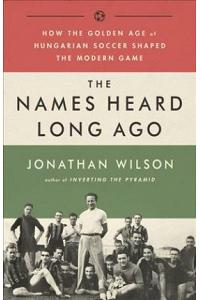 The Names Heard Long Ago: How the Golden Age of Hungarian Soccer Shaped the Modern Game

Publication Date: 17 September 2019
The story of the vibrant and revolutionary soccer culture in Hungary that, on the eve of World War II, redefined the modern game and launched a new era.
In the cities of the former Austro-Hungarian Empire in the years after World War One, soccer gained popularity alongside the rise of a new middle class. These intellectuals brought an academic, mathematical rigor to the game, discussing not just what was, but imagining what could be possible. Soccer flourished, in Hungary in particular; professional leagues were established, and the game became universally loved across social classes and backgrounds.
As Inverting the Pyramid author Jonathan Wilson narrates in The Names Heard Long Ago, the school that emerged from Budapest in the late 1920s and early 1930s is one of the most influential in soccer history. The culture flourished in the shadow of rising fascism and the march toward war. By the onset of World War Two, so many players and coaches had left, some for financial reasons, some because they were Jewish and fleeing anti-Semitism. But even when scattered far and wide, they still left their mark on the game: in Italy, Argentina, Brazil, and in the final glory of Hungary's unbeatable side in the 1950s.
The Names Heard Long Ago is the story of this vibrant, tragic era - and how it fundamentally transformed the game.