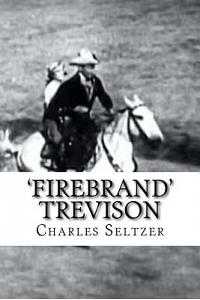 The encroachment of the railroad brought Rosalind Benham--and also results in a clash between Corrigan and "Firebrand" that ends when the better man wins. Show Excerpt -except as they might have been reminded of the dreary distance from the glitter and the tinsel of the East. The mountains, distant and shining, would have meant nothing to them; the strong, pungent aroma of the sage might have nauseated them. But Miss Benham had caught her first glimpse of Manti and the surrounding country from a window of her berth in the car that morning just at dawn, and she loved it. She had lain for some time cuddled up in her bed, watching the sun rise over the distant mountains, and the breath of the sage, sweeping into the half-opened window, had carried with it something stronger--the lure of a virgin country. Aunt Agatha Benham, chaperon, forty--maiden lady from choice--various uncharitable persons hinted humorously of pursued eligibles--found Rosalind gazing ecstatically out of the berth window when she stirred and awoke shortly after nine. Agatha climbed out of her berth and sat on its edge, yawning sleepily. "This is Manti, I suppose," she said acridly, shov