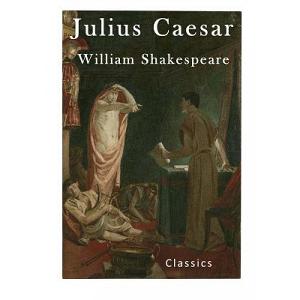 The Tragedy of Julius Caesar is a tragedy by William Shakespeare, believed to have been written in 1599. It is one of several plays written by Shakespeare based on true events from Roman history, which also include Coriolanus and Antony and Cleopatra.

Although the title is Julius Caesar, Caesar is not the most visible character in its action, appearing alive in only three scenes. Marcus Brutus speaks more than four times as many lines, and the central psychological drama of the play focuses on Brutus' struggle between the conflicting demands of honor, patriotism and friendship.

The play opens with the commoners of Rome celebrating Caesar's triumphant return from defeating Pompey's sons at the battle of Munda. Two tribunes, Flavius and Marrullus, discover the commoners celebrating, insult them for their change in loyalty from Pompey to Caesar, and break up the crowd. They also plan on removing all decorations from Caesar's statues and ending any other festivities. In the next scene, during Caesar's parade on the feast of Lupercal, a soothsayer warns Caesar to "Beware the ides of March," a warning he disregards. The action then turns to the discussion between Brutus and Cassius. In this conversation, Cassius attempts to influence Brutus' opinions into believing Caesar should be killed, preparing to have Brutus join his conspiracy to kill Caesar. They then hear from Casca that Mark Antony has offered Caesar the crown of Rome three times, and that each time Caesar refused it, fainting after the last refusal. Later, in act two, Brutus joins the conspiracy, although after much moral debate, eventually deciding that Caesar, although his friend and never having done anything against the people of Rome, should be killed to prevent him from doing anything against the people of Rome if he were ever to be crowned. He compares Caesar to "A serpents egg/ which hatch'd, would, as his kind, grow mischievous, / and kill him in the shell.," and decides to join Cassius in killing Caesar.