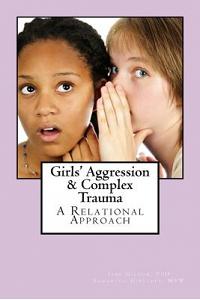 We wrote this series of blogs on girls' aggression for child welfare social workers and service providers, educators, and parents. Each year, uncounted numbers of children and young people experience complex trauma, which is a series of adversities that are so upsetting that they affect mood, attention, and emotional health and also threaten healthy social, emotional, and neurological development. Children with complex trauma, such as physical and verbal abuse in combination with loss and abandonments, are at risk to behave in aggressive ways. The goal of service to young people who have issues with aggression is to foster their self-compassion that in turn leads to compassion for others. The development of self-compassion arises through experiences of being treated with compassion. This means building relationships with young people. In this blog series, we recommend relational interviews, which are of means encouraging young people to talk about what is important to them. With the establishment of trust, reduction of aggression and increases in prosocial behaviors are possible. African American young people are over-represented in child welfare caseloads and are also over-represented in cases of aggressive behaviors, suspensions, expulsions, and school dropouts. Child welfare social workers, therefore, negotiate complex issues related to race, ethnicity, gender, trauma, and school policies when they provide services to young clients who behave in aggressive ways. How professionals and other adults respond to young people can influence the quality of their lives and the quality of the lives of others, such as other students, teachers, siblings, parents, and neighbors. If the aggression is not addressed effectively during the younger years, young people may grow into adults when their aggression may harm their children, other family members, and people in their neighborhoods and communities. Furthermore, there is a well-documented maltreatment to prison pipeline for boys as well as girls. The rates of abuse and neglect among young people in juvenile corrections and prisons are far higher than in the general population. Professionals who work with children are positioned to affect policies and programs through direct work with young people and with school personnel. They can engage in relational interviews with parents and school staff in order to replace punitive polices with relational and restorative polices. Our purposes are to raise awareness of issues and interventions related to aggression in schools and other settings and to encourage child welfare social workers to take leadership in policies for young people who act out in aggressive ways. Far too often school policies and policies in other settings are punitive rather than restorative and silencing of students rather than inviting them into relationship through dialogue. We spotlight girls' aggression because in national and understandable concerns for boys' aggression, girls are often overlooked. Our writing of this series of blogs is based on several goals, among them keeping everyone safe and the promotion the optimal development of young people. This includes targets, bystanders, and persons who act in aggressive ways. Our concerns extends to the affects of aggression on school climate and the climate of other settings in which aggression occurs. In schools, aggression affects the safety of students and staff. It also affects learning and the capacities of young people to develop healthy peer relationships. Aggression has similar affects in other settings such as families, neighborhoods, and recreational facilities. Learning and optimal development take place in settings where people feel safe.