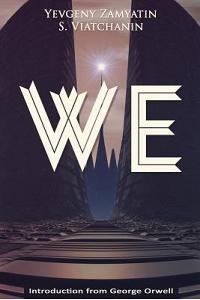 We: With Introduction, Summary & Analysis

"1000 Novels Everyone Must Read: # 1 Best Dystopias" The Guardian "Fantastic " The New York Times "A dystopian novel for the 21st century" The Week "Years before "1984," Yevgeny Zamyatin wrote We - a dystopian nightmare that remains eerily relevant even as Huxley and Orwell seem almost quaint." Salon

The time is around a thousand years from now, and the place is a great city-state in which a mathematically perfect society has been established. People here do not have names, but numbers only. Since they have nothing to hide from each other, they live in buildings made of glass. Their lives are regulated by The Time Tablet, a universal schedule that clearly states which number should do what at a particular hour. The novel starts with a call. As a new spaceship, called Integral, is being built, the One State calls upon its citizens to write something praising their state so that the Integral could carry this message to other civilizations in the depths of the Universe. A 32-year-old mathematician "named" D-503, who is a Constructor of the Integral and a sincere admirer of the One State, starts a diary to describe his life to his unknown extraterrestrial readers. He writes about FREEDOM and LOVE, CONTROL and HAPPINESS. This diary is the novel itself. EXTRACT