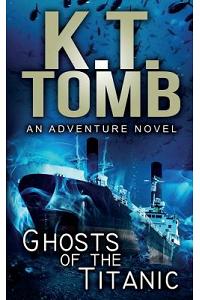 Ghosts of the Titanic

K.T. Tomb takes an infamous page from history and recreates it as a sweeping adventure thriller and undersea treasure hunt in GHOSTS OF THE TITANIC. First, she takes readers back to 1912 and the maiden voyage. Forbidden Russian lovers-Stephan Ivanovich, a peasant farmer, and Darya Nikita, an aristocrat with a dowry of diamonds-board the Titanic so they can elope and enjoy a life together in America.

The plot fast-forwards to a present-day quest and introduces illegal salvage entrepreneurs posing as documentary filmmakers. Captain Jonathan Martin and his hand-picked crew go to the deep-sea waters of Newfoundland, Canada, to try to recover the diamonds for Darya's descendants, who hired them. Nick and Franco, the divers, conflict with Lisa, the ship's medic, who's in charge of training them to use their new technology. They all have their doubts about the presence of James Harper, a wanted criminal, on this ship.

In the past, Darya is trying to escape her aristocratic family and an arranged marriage. In the present, using experimental equipment, when divers Nick and Franco see ghosts on the wreck, an unexpected murder mystery unfurls startling secrets of the voyage before the Titanic hit the iceberg.

An ancient curse puts an additional paranormal spin on the dark secrets held by The Ghosts of the Titanic. And, once awakened, the ghosts aren't content to stay at the bottom of the ocean. A small team of adventurers risks their very lives-and possible arrest-for a sack of diamonds. Will they succeed in their treasure hunt, or die trying?

The past and the present juxtapose as the thrill builds in each world and the treasure hunt-turned cold-case murder investigation-hurtles toward its stunning conclusion.