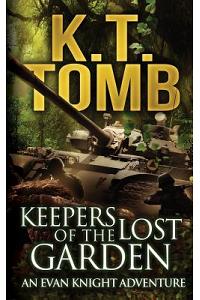 Keepers of the Lost Garden

Publication Date: 03 June 2015
In the second Evan Knight Adventure, Sulna, a fallen Daughter of Eve, enlists the aid of Alexey Konstantin, of Konstantin Pharmaceuticals, to break into the Mountain of God fortress-a secret lair with technology that protects the Garden of Eden.

Sulna's plan is to disarm the security for the Garden so she can destroy it. Even after learning of Sulna's vile appetites, Alexey's desire to claim the miraculous oil from the Tree of Life heightens his efforts to seize his one chance for immortality.

Meanwhile, a wounded Evan Knight and Jessima IL Eve race to Iran to get to the Garden before anyone else. Jess believes that Evan, the maverick historian and martial arts expert, is the Chosen One-the only one who can possibly save the Garden from destruction.

As Alexey calls in a mercenary army with heavy artillery, Evan asks his old friend, Geronimo, to assist them in the race to the Garden-and in its defense. Time is running out and Sulna's plan for the annihilation of the sacred Garden is nearly within her diabolical grasp.

Will Evan and Jess make it to the fortress in time to help the Daughters of Eve and save the Garden of Eden from annihilation?

The treacherous war between good and evil is about to begin...

KEEPERS OF THE LOST GARDEN is book two in the epic adventure series about the search for the Garden of Eden.