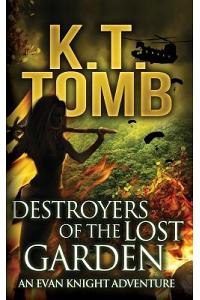 Destroyers of the Lost Garden

In the final Evan Knight Adventure about the search for the Garden of Eden, modern barbarians are nearly at the gate. Sulna, who believes she is the rightful heir, heads for the Garden with cohort Alexey Konstantin. Alexey has profit on his mind. She wants to burn Eden to the ground.

The immortal Daughters of Eve, protectors of the Garden of Eden and the Tree of Life, prepare to fight those who would steal or destroy it. When a computer virus takes down the defense grid, Mother Daughter is trapped inside the Mountain of God fortress. She sends telepathic messages to her Daughters.

Jessima IL Eve, one of the Daughters in the mortal world, receives the message. Accompanied by Evan Knight, maverick historian and martial arts expert, Jess hurries to aid her sisters in protecting the Garden and the Tree of Life. With the usual routes sealed off, Jess tells Evan to lead the way, but he must do it without alerting the Iranians to their presence.

As they get closer to the Garden, Jess's feelings for Evan cloud her warrior's judgment and her immortal instincts. She knows that Evan is the Chosen One to save Eden and the Tree with the miraculous oil, but she thinks of him as her lover. An inner battle wages war between her emotions and her divine duty, but at all costs, she cannot let the Garden of Eden fall to evil ones.

When more factions converge on the Garden, a battle royal will decide its fate. When the time comes for either good or evil to prevail, will Jess be able to make a noble sacrifice for the greater good?

DESTROYERS OF THE LOST GARDEN is book three, the final novel in the epic adventure series about the search for the Garden of Eden.