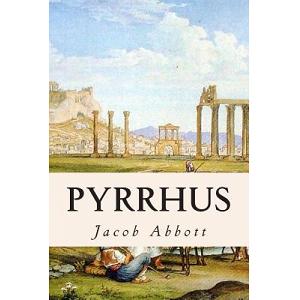 In respect to the heroes of ancient history, who lived in times antecedent to the period when the regular records of authentic history commence, no reliance can be placed upon the actual verity of the accounts which have come down to us of their lives and actions. In those ancient days there was, in fact, no line of demarkation between romance and history, and the stories which were told of Cyrus, Darius, Xerxes, Romulus, Pyrrhus, and other personages as ancient as they, are all more or less fabulous and mythical. Pyrrhus (Pyrrhos; 319/318-272 BC) was a Greek general and statesman of the Hellenistic period. He was king of the Greek tribe of Molossians, of the royal Aeacid house (from c. 297 BC), and later he became king of Epirus (r. 306-302, 297-272 BC). He was one of the strongest opponents of early Rome. Some of his battles, though successful, caused him heavy losses, from which the term Pyrrhic victory was coined. He is the subject of one of Plutarch's Parallel Lives. Pyrrhus was the son of Aeacides and Phthia, a Thessalian woman, and a second cousin of Alexander the Great (via Alexander's mother, Olympias). He had two sisters: Deidamia and Troias. In 317 BC, when Pyrrhus was only two, his father was dethroned. Pyrrhus' family took refuge with Glaukias of the Taulantians, one of the largest Illyrian tribes. Pyrrhus was raised by Beroea, Glaukias's wife and a Molossian of the Aeacidae dynasty. Glaukias restored Pyrrhus to the throne in 306 BC until the latter was banished again, four years later, by his enemy, Cassander. Thus, he went on to serve as an officer, in the wars of the Diadochi, under his brother-in-law Demetrius Poliorcetes who married Deidamia. In 298 BC, Pyrrhus was taken hostage to Alexandria, under the terms of a peace treaty made between Demetrius and Ptolemy I Soter. There, he married Ptolemy I's stepdaughter Antigone (a daughter of Berenice I of Egypt from her first husband Philip-respectively, Ptolemy I's wife and a Macedonian noble) and restored his kingdom in Epirus in 297 BC with financial and military aid from Ptolemy I. Pyrrhus had his co-ruler Neoptolemus II of Epirus murdered. In 295 BC, Pyrrhus transferred the capital of his kingdom to Ambrakia (modern Arta). Next, he went to war against his former ally and brother-in-law Demetrius and in 292 BC he invaded Thessaly while Demetrius was besieging Thebes but was repulsed. In 288 BC, Pyrrhus and Lysimachus shared rulership over the kingdom of Macedon until 284 BC when Lysimachus drove Pyrrhus out of the region back into Epirus. The Greek city of Tarentum, in southern Italy, fell out with Rome due to a violation of an old treaty that specified Rome was not to send warships into the Tarentine Gulf. In 282 BC, the Romans installed garrisons in the Greek cities of Thurii (on the western end of the Tarentine Gulf), Locri, and Rhegium, and sent warships to Thurii. Although this was designed as a measure against the Italian peoples of Lucania, the Tarentines grew nervous and attacked the Romans in Thurii, driving the Roman garrison from the city and sinking several Roman warships. Tarentum was now faced with a Roman attack and certain defeat, unless they could enlist the aid of greater powers. Rome had already made itself into a major power, and was poised to subdue all the Greek cities in Magna Graecia. The Tarentines asked Pyrrhus to lead their war against the Romans. Pyrrhus was encouraged to aid the Tarentines by the Oracle of Delphi. His goals were not, however, selfless. He recognized the possibility of carving out an empire for himself in Italy. He made an alliance with Ptolemy Ceraunus, King of Macedon and his most powerful neighbor, and arrived in Italy in 280 BCE.