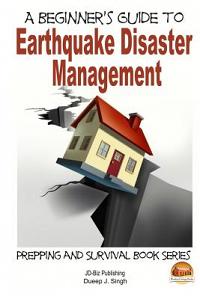 A Beginner's Guide to Earthquake Disaster Management Table of Contents Introduction What You Should Know about Earthquakes What Are the Aftermaths of an Earthquake Which Are the Safe Places in Your House Fear of Earthquakes First Aid Training Behavior of Children during Earthquakes Emergency Earthquake Disaster Kit Home Extinguishers for Electric Fires Items for Your Car Readying your house for An Earthquake Building Codes and Standards On the Road during an Earthquake Evacuation of your house Conclusion Author Bio Publisher Introduction Earthquakes have long been powerful natural calamities influencing the life and times of mankind down the centuries. One would not be surprised if the lost lands of Atlantis were buried under the sea because of a powerful underwater earthquake. In the same manner the Himalayan mountain range came out from under the Tethys sea millenniums ago, due to this upheaval when the tectonic plates of the land shifted and changed the topography of what is now known as the Indian subcontinent. So is it a wonder that earthquakes have always been considered by humans down the ages to be caused due to the wrath of the gods or due to some other supernatural mysterious agency, which created and destroyed and was terrible in its intensity while it lasted. Excavations in ancient China brought to light earthquake indicators made millenniums ago. These were frogs made up of metal, which had light round balls in their mouths. The moment the ground trembled in the vicinity, the vibrations would reach the metal, and the balls would drop down into the bowls underneath the frogs' mouths. I have a feeling that the ancient Chinese were used to earthquakes, because as far as I know, an earthquake needed to happen, before the vibrations would register. And at that time, it would be a situation of save yourself instead of looking at the earthquake indicator.