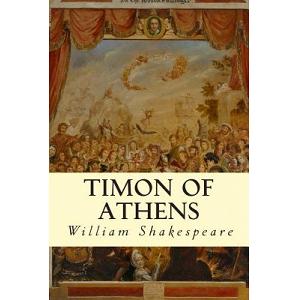 Timon of Athens is a William Shakespeare play about the fortunes of an Athenian named Timon generally regarded as one of his most obscure and difficult works. Originally grouped with the tragedies, it is generally considered one, but some scholars group it with the problem plays. In the beginning, Timon is a wealthy and generous Athenian gentleman. He hosts a large banquet, attended by nearly all the main characters. Timon gives away money wastefully, and everyone wants to please him to get more, except for Apemantus, a churlish philosopher whose cynicism Timon cannot yet appreciate. He accepts art from Poet and Painter, and a jewel from the Jeweller, but by the end of Act 1, he has given that away to another friend. Timon's servant, Lucilius, has been wooing the daughter of an old Athenian. The man is angry, but Timon pays him three talents in exchange for the couple being allowed to marry, because the happiness of his servant is worth the price. Timon is told that his friend, Ventidius, is in debtors' prison. He sends money to pay Ventidius's debt, and Ventidius is released and joins the banquet. Timon gives a speech on the value of friendship. The guests are entertained by a masque, followed by dancing. As the party winds down, Timon continues to give things away to his friends; his horses, and other possessions. The act is divided rather arbitrarily into two scenes but the experimental and/or unfinished nature of the play is reflected in that it does not naturally break into a five-act structure. Now Timon has given away all his wealth. Flavius, Timon's steward, is upset by the way Timon has spent his wealth, overextending his munificence by showering patronage on the parasitic writers and artists, and delivering his dubious friends from their financial straits; this he tells Timon when he returns from a hunt. Timon is upset that he has not been told this before, and begins to vent his anger on Flavius, who tells him that he has tried repeatedly in the past without success, and now he is at the end; Timon's land has been sold. Shadowing Timon is another guest at the banquet: the cynical philosopher Apemantus, who terrorises Timon's shallow companions with his caustic raillery. He was the only guest not angling for money or possessions from Timon. Along with a Fool, he attacks Timon's creditors when they show up to make their demands for immediate payment. Timon cannot pay, and sends out his servants to make requests for help from those friends he considers closest. Timon's servants are turned down, one by one, by Timon's false friends, two giving lengthy monologues as to their anger with them. Elsewhere, one of Alcibiades's junior officers has reached an even further point of rage, killing a man in "hot blood." Alcibiades pleads with the Senate for mercy, arguing that a crime of passion should not carry as severe a sentence as premeditated murder. The senators disagree, and, when Alcibiades persists, banish him forever. He vows revenge, with the support of his troops. The act finishes with Timon discussing with his servants the revenge he will carry out at his next banquet. Timon hosts a smaller party, intended only for those he feels have betrayed him. The serving trays are brought in, but under them the friends find rocks and lukewarm water. Timon sprays them with the water, throws the dishes at them, and flees his home. The loyal Flavius vows to find him. Timon renounces society (1803 engraving for Shakespeare, Timon of Athens, Act IV, Scene 1) Cursing the city walls, Timon goes into the wilderness and makes his crude home in a cave, sustaining himself on roots. Here he discovers an underground trove of gold. The knowledge of his discovery spreads. Alcibiades, Apemantus, and three bandits are able to find Timon before Flavius does. Accompanying Alcibiades are two prostitutes, Phrynia and Timandra, who trade barbs with the bitter Timon on the subject of venereal disease.