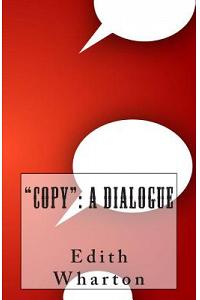 Or   400 PEC Points
In Stock
If stock becomes available, email me at:

"Copy" A Dialogue is a short story by Edith Wharton. Edith Wharton ( born Edith Newbold Jones; January 24, 1862 - August 11, 1937) was a Pulitzer Prize-winning American novelist, short story writer, and designer. She was nominated for the Nobel Prize in Literature in 1927, 1928 and 1930. Wharton combined her insider's view of America's privileged classes with a brilliant, natural wit to write humorous, incisive novels and short stories of social and psychological insight. She was well acquainted with many of her era's other literary and public figures, including Theodore Roosevelt. Wharton was born to George Frederic Jones and Lucretia Stevens Rhinelander in New York City. She had two brothers, Frederic Rhinelander and Henry Edward. The saying "Keeping up with the Joneses" is said to refer to her father's family. She was also related to the Rensselaer family, the most prestigious of the old patroon families. She had a lifelong friendship with her Rhinelander niece, landscape architect Beatrix Farrand of Reef Point in Bar Harbor, Maine. In 1885, at 23, she married Edward (Teddy) Robbins Wharton, who was 12 years older. From a well-established Philadelphia family, he was a sportsman and gentleman of the same social class and shared her love of travel. From the late 1880s until 1902, he suffered acute depression, and the couple ceased their extensive travel. At that time his depression manifested as a more serious disorder, after which they lived almost exclusively at The Mount, their estate designed by Edith Wharton. In 1908 her husband's mental state was determined to be incurable. She divorced him in 1913. Around the same time, Edith was overcome with the harsh criticisms leveled by the naturalist writers. Later in 1908 she began an affair with Morton Fullerton, a journalist for The Times, in whom she found an intellectual partner. In addition to novels, Wharton wrote at least 85 short stories. She was also a garden designer, interior designer, and taste-maker of her time. She wrote several design books, including her first published work, The Decoration of Houses of 1897, co-authored by Ogden Codman. Another is the generously illustrated Italian Villas and Their Gardens of 1904.