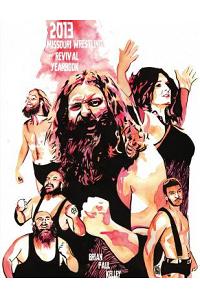 Publication Date: 11 February 2014
Since 2008 Missouri Wrestling Revival has supported the men and women in pro wrestling in the Midwest. Throughout the past 6 years we have had the support and assistance of many great people. From the promoters that work hard to promote shows with their hard earned money and deliver an exciting night for fans to remember to the wrestlers that have driven miles and miles down the road each and every weekend. We have worked closely during the years with many of the top writers, photographers, artist and fans that have true love and respect for the sport. The 2013 MWR Yearbook returns with the Artist of Champions Rob Schamberger once again painting and designing the cover feature the 2013 MWR Year end Award Recipients. For the low price of 19.95 on Amazon.com this book is filled with over 650 photos and over 300 pages. To put that in perspective the cost of this book is only .7 cents per page If that is not enough for you to purchase the book the cover of the the 2013 MWR Yearbook features the return of "The Artist of Champions" Rob Schamberger, painting and designing the cover feature the 2013 MWR Award Recipients. Highlights include - Introduction by Midwest star Darin Corbin - January- December Top Stories - Mike Wilson's Shooter Spotlights - Articles from Adam Testa, Ben Simon, Herb Simmons, David J. McCutcheon, Mike Wilson, Patrick Brandmeyer, Pete Sakaris, Steven Lucas, Matt Murphy, Patrick Harden, Chris Roedel, Eleanor Harris, Midnight Guthrie, Josh Ray, Brady Lawrence and Jesse Matthews. - Artwork from Artists Mark Taggart, ICON, Raven Johnson, Michael Liao, and Ron McCaffery III - Artwork of Harley Race, Bruiser Brody, Rufus R. Jones, Macho Man Randy Savage,"Dr. Death" Steve Williams, "Bulldog" Bob Brown Buck Robley, The Great Cheyenne, Ricky Cruz, ACH, Heath Hatton, Dan Walsh, Dubray Tallman, "Miss Natural" Heather Patera, Bull Schmitt, The Magic Man, Sean Vincent, Rachael Summerlyn, Davey Vega, Mark Sterling, Stacey O'Brien, Darin Corbin, Ruff Crossing and the Ladies of MWR featuring every female star that entered a MWR promotion in 2013. - MWR Complete results page of all the 2013 show. - MWR Friends and Family photo collection. - Wrestle Wear Beyond Compare- MWR Wrestlers model their own shirts. - A look at books from authors in the Midwest including. o Larry Matysik's 50 Greatest Wrestlers of All-time. o Matt Murphy's The Story of a Nobody and the pursuit to become Somebody. o Wrestling at the Chase photographer Roger Deem's the Strap. o Blood, Tables and Chairs - "The Story of an independent Wrestler" - Matt Murphy remembers Dr. Death Steve Williams - Larry Matysik and Pete Madden on Eddie Smith. - Wade Chism Flashback. - The return of the very popular Favorite matches by the wrestlers themselves .. This year we have o Brandon Espinosa o The Drill Instructor o Flash Flanagan o Heather Patera o The Hooligans - MWR Top Prospects - MWR Trading Card list - From the Desk of promoter Herb Simmons. - MWR by the numbers.. - MWR Year in Awards and for the first time who were the runner ups - THIS AND MUCH MORE So don't wait any longer be sure to purchase yourself a copy of the 2013 MWR Yearbook and add it to your collection with the 2011 and 2012 Thank you for your support of MWR and we hope to see you at a show in 2014