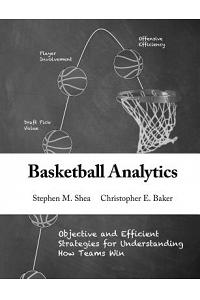 Basketball Analytics is a must-read for any sports analytics enthusiast or student of the game of basketball. Authors Stephen Shea, Ph.D. (Professor of Mathematics) and Christopher Baker (Software Engineer) utilize their unique skill-set to introduce original metrics for analyzing player performance, team style and team construction in the NBA. While demonstrating an awareness of the industry's best ideas, the authors present original, objective and efficient strategies for understanding how teams win. New player performance statistics include Offensive Efficiency (OE), Efficient Offensive Production (EOP), Defensive Stops Gained (DSG), and Approximate Value (AV). OE reflects a player's ability to make the most fundamental offensive decisions. EOP adjusts a player's points and assists based on his efficiency. DSG gives a complete measure of a player's defensive contributions, without relying on individual player statistics like blocks and steals. AV is a measure of total player performance that rivals any publicly available statistic. Basketball Analytics introduces groundbreaking metrics on player involvement in the offense. Point, Rebound and Assist Balance aggregate player usage in these critical statistics. New studies on the NBA show whether teams should strive for balance or unbalance. An NBA draft pick value study determines the average value of each pick and the likelihood of landing a star or role player with each draft position. The results of this study are used to discuss topics including the biggest draft blunders and steals, the draft success of each NBA team, and the quality of each draft class dating back to 1977. This valuable understanding of the NBA Draft creates a foundation for discussing various approaches to team development and construction. Additionally, the authors discuss redefining the positions on the court, unpredictability in the game, data visualization, and applications of spatial tracking technology. There are many intensely debated questions surrounding the NBA today. Who are the most valuable players, and how do they compare to past greats? Which players have the greatest impact on their team's defense? Should Kobe Bryant be concerned with getting his teammates involved in the offense? How do offenses differ in the clutch, and which players thrive in these situations? How difficult is it for a team to rebuild through the draft? Basketball Analytics introduces new statistics and new concepts to explore these questions and more.