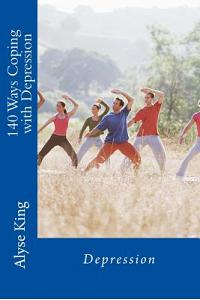 140 Ways Coping with Depression: How a Mother Coped with Stress, Depression and Stigmas

Publication Date: 14 October 2013
In today's difficult and challenging economic environment, many factors contribute to mental health issues. No one is able to predict who may succumb to mental illness. Parents all over the world who care about their children's mental health will want to read this book. I was shocked when mental illnesses struck two of my four children. Soon after, I was struck too. While caring for my children, I was diagnosed as suffering with major depression and stress. This is my journey of how I coped with my two children's struggles with schizophrenia, major depression and bipolar disorders. This is truly a heartbreaking journey with battling impossible odds to help my son cope after one psychiatrist told me that my son may never recover or may have only one-third chance of recovery. Once I received that devastating prognosis, I devoted all my waking hours to caring for him. I refused to accept the diagnosis. I wanted to prove the doctor wrong. I worked tirelessly until I received successful results. Little did I know that I was being prepared for another shocking realization. Six short years later, one of my daughters became mentally ill. Like any other illness, knowledge and early detection of schizophrenia, major depression and bipolar disorders is vitally important to prevent years of pain and hardships. Unfortunately, the symptoms during the early stages of mental illness were truly deceptive and confusing. They were unsuspecting and gradual, which made it impossible to detect them as the beginning signs of mental illness. My agonizing experience shows the importance of learning and understanding early signs of mental illness. Many Americans recognize the illnesses only when these illnesses have slipped far from reality, such as having a horrible breakdown. This book is a story for any family who confronts difficulties with mental illnesses or any American living with the economic realities of 21st Century America, who cannot cope with mental breakdown. It is an inspirational book of faith and hope, and the bravery of not giving up or giving out. It is impossible to imagine a journey into a life with paranoid schizophrenia, major depression and bi-polar disorders. It is a journey happening to someone else's sons and daughters. It is a journey that is, at times, embarrassing to tell. It is a journey that is all too heart breaking. At times, I felt that death would have been more comforting than living with the struggles and heartbreaks of mental illnesses. The mass confusions that came from these illnesses caused both my son and daughter further feelings of hopelessness and helplessness. There were constant, "Why Me's," and many, "What-Ifs." Happily, over time, as their health improved, they were able to ask "Why not me?" or "Why not us?" For years, with the severity and the debilitation from these illnesses, there was a near zero chance that my son and daughter would lead normal lives again. Their inabilities to accomplish any of life's tasks caused them many distresses, resulting in further mental breakdown. They desperately needed to cope, as the fears of mental illnesses were greater than their coping abilities. It was a very weighty and challenging task, but I continued without let up to find new and different ways to help them. Learning new ways to cope was an on-going process. This is a book of assuring hope, and never releasing that hope. All the recommendations offered in this book helped my son and daughter on their difficult roads to recovery. They may also be helpful to you. I am writing this book to inspire others that in the face of unfathomable challenges with mental illness, one can learn to cope because there is hope for recovery. The passing years have brought me much knowledge, experience and wisdom. During the course of writing this book, I learned how much my son and daughter endured and the outstanding courage and strength they displayed in the face of their adversities.