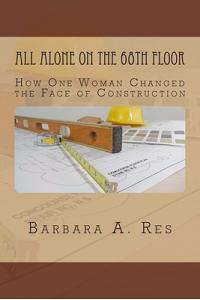 All Alone on the 68th Floor: How One Woman Changed the Face of Construction

Publication Date: 10 July 2013
Barbara Res found her way into Engineering in college. Although she had the highest Mathematics grades in her school and excelled at Science, she was steered into a career of teaching because she was a girl. Rebelling against the conventional wisdom, she planned first to major in computers and then later picked engineering because of the challenge. She graduated in 1972 as one of three women in a class of 800 and entered the rough and tumble world of construction. Unfortunately, construction remains a heavily male dominated industry, but in 1972, it was a "no woman's land," and Res met resistance at every turn, in the form of discrimination, sexual harassment and intimidation. She was literally barred from the work site, a move that prevented her from advancing in her job. She quit several positions because of discrimination. Finally, she took a chance on a part time position she parlayed into a career beginner with a major Construction company in NY. After holding several "men's jobs" in contracting, Res met Donald Trump, at the Grand Hyatt project he was developing for the hotel company. She impressed him and when he had a new ground up project, he installed her as Executive in charge of Construction. The project was the world famous Trump Tower and the rest is history - a history filled with travail and triumph. All on the 68th Floor tells the story of Res's journey, what she endured and accomplished. It also describes the process of building in a way that entertains and instructs. The book is chock full of anecdotes about the rich and famous who lived and shopped at the luxurious Trump Tower and presents a picture of Donald and Ivana Trump as builders, that the world has yet to see. The author also talks about other projects, like the restoration of the Plaza Hotel and the development of the West side of Manhattan. Contracts and contractors, unions and government, politics and payoffs, all of the intrigue that goes into developing property, getting approvals, getting tenants and finally building skyscrapers. But the essence of the book is frankly feminism. It is a call to women to be themselves and do what ever job they think they can do, whatever they want to do and not allow stereotypes to influence them. It is a rebuke to the notion that women need to think or act like men, stating to the contrary that there should be no norms to follow and that people should be individuals following their instincts and not allowing society to define who they are by what they do. Res points out the dismal statistics about the number of women in construction, about the discrimination that still exists and issues a call to action to women, businesses and politics to take steps to get more women into this lucrative field, for which they are well suited. This book has something for everyone and is guaranteed to amuse, inspire and challenge everyone who reads it.