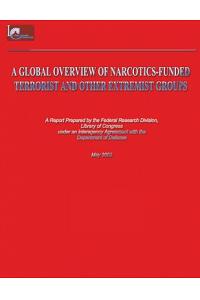 A Global Overview of Narcotics-Funded Terrorist and Other Extremist Groups

This publication, "A Global Overview of Narcotics-Funded Terrorist and Other Extremist Groups," provides information on a global survey, based entirely on open sources, and is intended to provide an assessment of the nexus between selected anti-U.S. terrorist and extremist groups in the world and organized crime, specifically drug trafficking, and how this relationship might be vulnerable to countermeasures. More specifically, the aim is to help develop a causal model for identifying critical nodes in terrorist and other extremist networks that can be exploited by Allied technology, just as counterdrug technology has been used in the war against drug trafficking. To this end, the four analysts involved in this study have examined connections between extremist groups and narcotics trafficking in the following countries, listed by region in order of discussion in the text: Latin America: Triborder Region (Argentina, Brazil, and Paraguay), Colombia, and Peru; the Middle East: Lebanon; Southern Europe (Albania and Macedonia); Central Asia: Kyrgyzstan, Tajikistan, and Uzbekistan; and East Asia: Philippines. These are preliminary, not definitive, surveys. Most of the groups examined in this study have been designated foreign terrorist organizations by the U.S. Department of State. The exceptions may be the small Albanian insurgent groups and the Central Asian organization called the Hizb-ut-Tahir (HT). These groups are included anyway because of their links to al Qaeda and narcotics trafficking, as well as because of their potential for terrorism. Although research was begun on groups in Egpyt (al-Gama'a al-Islamiyya and Islamic Jihad), Somalia (Al-Ittihad al-Islamiya), South Africa (People Against Gangsterism and Drugs-PAGAD), and Yemen (Islamic Army of Aden), insufficient information was found on links with the drug trade to merit further investigation, given the time constraints of this research project. In the cases of PAGAD and al-Gama'a al-Islamiyya, however, further research may be warranted because the possibility of involvement with the narcotics trade cannot be ruled out.