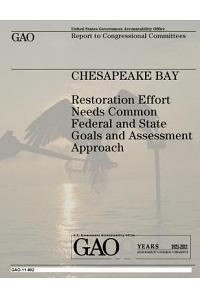 Or   592 PEC Points
In Stock
If stock becomes available, email me at:

GAO-11-802. The Chesapeake Bay, with its watershed in parts of six states and the District of Columbia (watershed states), is an important economic and natural resource that has been in decline. Over decades, federal agencies and watershed states have entered into several agreements to restore the bay, but its health remains impaired. In May 2009, Executive Order 13508 established a Federal Leadership Committee, led by the Environmental Protection Agency (EPA), and directed the committee to issue a strategy by May 2010 to protect and restore the Chesapeake Bay (the Strategy). GAO was directed by the explanatory statement of the Consolidated Appropriations Act, 2008, to conduct performance assessments of progress made on bay restoration, and this first assessment examines (1) the extent to which the Strategy includes measurable goals for restoring the bay that are shared by stakeholders and actions to attain these goals; (2) the key factors, if any, federal and state officials identified that may reduce the likelihood of achieving Strategy goals and actions; and (3) agency plans for assessing progress made in implementing the Strategy and restoring bay health. GAO reviewed the Strategy, surveyed federal officials, and interviewed watershed state officials and subject matter experts. The Strategy for Protecting and Restoring the Chesapeake Bay Watershed includes 4 broad goals, 12 specific measurable goals with deadlines, and 116 actions to restore the bay by 2025. To achieve the broad and measurable goals, federal agencies, often in collaboration with the watershed states and other entities, are responsible for accomplishing the actions. However, not all stakeholders are working toward achieving the Strategy goals. The watershed states are critical partners in the effort to restore the bay, but state officials told GAO that they are not working toward the Strategy goals, in part because they view the Strategy as a federal document. Instead, most state bay restoration work is conducted according to state commitments made in a previous bay restoration agreement, the Chesapeake 2000 Agreement. Even though Strategy and Chesapeake 2000 Agreement goals are similar to some degree, they also differ in some ways. For example, both call for managing fish species, but the Strategy identifies brook trout as a key species for restoration and the Chesapeake 2000 Agreement does not. Federal and state officials said it is critical that all stakeholders work toward the same goals. The Federal Leadership Committee and the Chesapeake Bay Program--a restoration group established in 1983 that includes federal agencies and watershed states--created an action team in June 2010 to work toward aligning bay restoration goals. Officials from the 11 agencies responsible for the Strategy that GAO surveyed identified three key factors that may reduce the likelihood of achieving Strategy goals and actions: a potential lack of collaboration among stakeholders; funding constraints; and external phenomena, such as climate change. State officials and subject matter experts that GAO interviewed raised similar concerns. Federal officials reported that some form of collaboration is needed to accomplish the Strategy's measurable goals and the vast majority of its actions. In particular, federal-state collaboration is crucial, with federal officials indicating that collaboration with at least one state is necessary to accomplish 96 of the 116 actions in the 12 measurable goals. Federal officials also reported that funding constraints could reduce the likelihood of accomplishing 69 of the actions in 11 of the measurable goals. Furthermore, federal officials reported that external phenomena could reduce the likelihood that 8 of the measurable goals will be achieved.