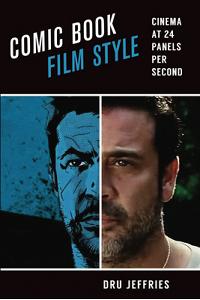 Superhero films and comic book adaptations dominate contemporary Hollywood filmmaking, and it is not just the storylines of these blockbuster spectacles that have been influenced by comics. The comic book medium itself has profoundly influenced how movies look and sound today, as well as how viewers approach them as texts. Comic Book Film Style explores how the unique conventions and formal structure of comic books have had a profound impact on film aesthetics, so that the different representational abilities of comics and film are put on simultaneous display in a cinematic work.

With close readings of films including Batman: The Movie, American Splendor, Superman, Hulk, Spider-Man 2, V for Vendetta, 300, Scott Pilgrim vs. the World, Watchmen, The Losers, and Creepshow, Dru Jeffries offers a new and more cogent definition of the comic book film as a stylistic approach rather than a genre, repositioning the study of comic book films from adaptation and genre studies to formal/stylistic analysis. He discusses how comic book films appropriate comics' drawn imagery, vandalize the fourth wall with the use of graphic text, dissect the film frame into discrete panels, and treat time as a flexible construct rather than a fixed flow, among other things. This cinematic remediation of comic books' formal structure and unique visual conventions, Jeffries asserts, fundamentally challenges the classical continuity paradigm and its contemporary variants, placing the comic book film at the forefront of stylistic experimentation in post-classical Hollywood.