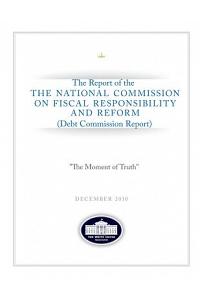 Painstakingly edited for an optimum eBook reading experience, including an active table of contents, this is the report of the Debt Commission of the United States Government. President Barack Obama commissioned a bipartisan panel to investigate the staggering National Debt and annual deficit of the United States Federal Government. The terrifying findings of that commission were published in this report in December 2010. It is titled "The Moment of Truth." Throughout our nation's history, Americans have found the courage to do right by our children's future. Deep down, every American knows we face a moment of truth once again. We cannot play games or put off hard choices any longer. Without regard to party, we have a patriotic duty to keep the promise of America to give our children and grandchildren a better life. Our challenge is clear and inescapable: America cannot be great if we go broke. Our businesses will not be able to grow and create jobs, and our workers will not be able to compete successfully for the jobs of the future without a plan to get this crushing debt burden off our backs. Ever since the economic downturn, families across the country have huddled around kitchen tables, making tough choices about what they hold most dear and what they can learn to live without. They expect and deserve their leaders to do the same. The American people are counting on us to put politics aside, pull together not pull apart, and agree on a plan to live within our means and make America strong for the long haul. As members of the National Commission on Fiscal Responsibility and Reform, we spent the past eight months studying the same cold, hard facts. Together, we have reached these unavoidable conclusions: The problem is real. The solution will be painful. There is no easy way out. Everything must be on the table. And Washington must lead. We come from different backgrounds, represent different regions, and belong to different parties, but we share a common belief that America's long-term fiscal gap is unsustainable and, if left unchecked, will see our children and grandchildren living in a poorer, weaker nation. In the words of Senator Tom Coburn, "We keep kicking the can down the road, and splashing the soup all over our grandchildren." Every modest sacrifice we refuse to make today only forces far greater sacrifices of hope and opportunity upon the next generation. Over the course of our deliberations, the urgency of our mission has become all the more apparent. The contagion of debt that began in Greece and continues to sweep through Europe shows us clearly that no economy will be immune. If the U.S. does not put its house in order, the reckoning will be sure and the devastation severe. The President and the leaders of both parties in both chambers of Congress asked us to address the nation's fiscal challenges in this decade and beyond. We have worked to offer an aggressive, fair, balanced, and bipartisan proposal - a proposal as serious as the problems we face. None of us likes every element of our plan, and each of us had to tolerate provisions we previously or presently oppose in order to reach a principled compromise. We were willing to put our differences aside to forge a plan because our nation will certainly be lost without one. We do not pretend to have all the answers. We offer our plan as the starting point for a serious national conversation in which every citizen has an interest and all should have a say. Our leaders have a responsibility to level with Americans about the choices we face, and to enlist the ingenuity and determination of the American people in rising to the challenge. We believe neither party can fix this problem on its own, and both parties have a responsibility to do their part. The American people are a long way ahead of the political system in recognizing that now is the time to act.