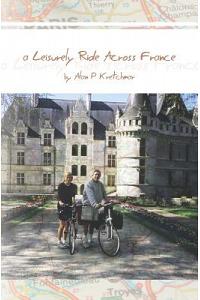 A Leisurely Ride Across France

"WOULDN'T IT BE NICE TO BICYCLE ACROSS FRANCE?" WE COULD JUST THROW ALL OUR GEAR ON THE BACK OF OUR BIKES AND TAKE OFF FOR POINTS UNKNOWN." That was a dream the author and his wife had twenty-five years ago. See what happens when they try to make that dream come true. Two middle-aged Americans set out on their own: finding their bikes in flea markets and used bike shops, finding accommodations as they arrive in tiny hamlets and large cities, learning how to order food with no knowledge of French and uncovering the art and culture of the areas they ride through. The dream becomes a physical and intellectual challenge that took six years on four separate trips to accomplish. During that time they learned not only about France but a lot about themselves and their ability to deal with travel adversities. Each day had a new challenge and they learned to deal with the good and the bad while on their two wheel Odyssey.