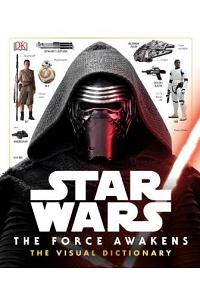 Or   638 PEC Points
Currently Unavailable
If stock becomes available, email me at:

Explore the characters, Droids(TM), aliens, and creatures of the latest chapter in the Star Wars(TM) saga in this definitive guide to Star Wars: The Force Awakens(TM).

Written by Lucasfilm insider Pablo Hidalgo, Star Wars: The Force Awakens The Visual Dictionary offers an inside look into the film; and pop culture website i09 says the book "gives fascinating insight into the world behind the movie."

Learn the names and explanations behind all the details of costumes, weapons, and accessories and discover the dark origins of Kylo Ren. Including three exclusive, specially-commissioned cutaway models produced by Industrial Light & Magic model maker John Goodson, Star Wars: The Force Awakens The Visual Dictionary is the perfect addition to any fan's bookshelf.