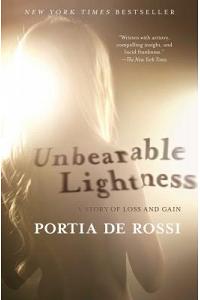 Unbearable Lightness: A Story of Loss and Gain

Book Description
In this searing, unflinchingly honest New York Times bestseller, actress Portia de Rossi shares the truth of her long battle to overcome anorexia and bulimia while living in the public eye, and details the new happiness and health she has found in recent years--including her coming out and her marriage to Ellen DeGeneres.
Now in paperback, the New York Times bestselling memoir from Portia de Rossi explores the truth of her long battle to overcome anorexia and bulimia--"an unusually fresh and engrossing memoir of both Hollywood and modern womanhood" ( Los Angeles Times, 5 stars).
In this groundbreaking memoir, Portia de Rossi reveals the pain and illness that haunted her for decades, from the time she was a twelve-year-old girl working as a model in Australia, through her early rise to fame as a cast member of the hit television show Ally McBeal. All the while terrified that the truth of her sexuality would be exposed in the tabloids, Portia alternately starved herself and binged, putting her life in danger and concealing from herself and everyone around her the seriousness of her illness.
She describes the elaborate rituals around food that came to dominate hours of every day and explores the pivotal moments of her childhood that set her on the road to illness. She reveals the heartache and fear that accompany a life lived in the closet, a sense of isolation that was only magnified by her unrelenting desire to be ever thinner, ever more in control of her body and the number of calories she consumed and spent.
From her lowest point, Portia began the painful climb back to a life of health and honesty, falling in love and marrying Ellen DeGeneres and emerging as an outspoken and articulate advocate for gay rights and women's health issues. In this remarkable and landmark book, she has given the world a story that inspires hope and nourishes the spirit.
Annotation
In this searing, unflinchingly honest book, de Rossi captures the complex emotional truth of what it is like when food, weight, and body image take priority over every other human impulse or action.