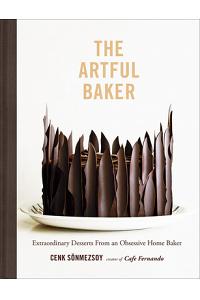 The Artful Baker: Extraordinary Desserts from an Obsessive Home Baker

Written, styled, photographed, and designed by Cenk S nmezsoy, The Artful Baker shares the inspiring story of a passionate home baker, beginning with his years after graduate school in San Francisco and showcasing the fruits of a baking obsession he cultivated after returning home to İstanbul. S nmezsoy's stories and uniquely styled images, together with his original creations and fresh take on traditional recipes, offer a thoughtful and emotional window into the life of this luminary artist.

Every recipe in The Artful Baker has gone through a meticulous development phase, tested by an army of home bakers having varying levels of skill, equipment, and access to ingredients, and revised to ensure that they will work flawlessly in any kitchen. Measurements of ingredients are provided in both volume and weight (grams). Where a volume measurement isn't useful, weight measurements are provided in both ounces and grams.