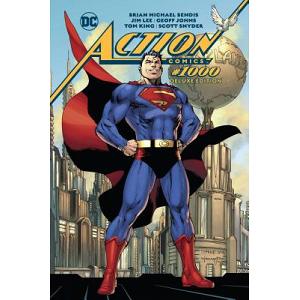 For over eight decades, Superman has been inspiring fans all across the globe. The Man of Steel has saved Metropolis--and the world--countless times over, but Superman's not done yet Begin the next chapter of the iconic superhero's journey by celebrating 1,000 issues of Action Comics, with a lineup of top talent as they pay tribute to the comic that started it all. This unforgettable collector's edition features stories and art by: Brian Michael Bendis, John Cassaday, Olivier Coipel, Paul Dini, Jos Luis Garc a-L pez, Patrick Gleason, Butch Guice, Geoff Johns, Dan Jurgens, Tom King, Jim Lee, Clay Mann, Brad Meltzer, Jerry Ordway, Louise Simonson, Scott Snyder, Curt Swan, Peter J. Tomasi, Marv Wolfman and more Collected here for the first time is the celebrated, landmark issue Action Comics #1000, plus a host of extras, including a bonus story by comics legends Paul Levitz and Neal Adams, variant covers, scripts, cover sketches and the comic that started it all... the Superman story from Action Comics #1.