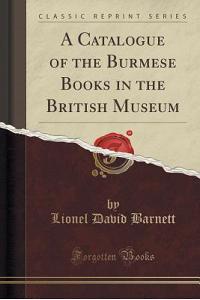 Excerpt from A Catalogue of the Burmese Books in the British Museum In one important respect I have deviated in transliteration from the modern pro nunciation. When two words are closely connected, and the first ends in a vowel or nasal and the second begins with a hard (unvoiwd) consonant, such as is the case in cogs, the actual pronunciation is ad dam, not ed tans; but I have usually in such cases preserved the hard consonant in transliteration, following the principle that each monosyllable should be rendered independently of its context. On the other hand, in one or two cases where the pronunciation differs widely and irregularly from the written word, i have followed the former, notably in the case of creep; which strictly should be rendered as Mai/dz, but is here given in the more readily recognizable form hpayriz. Names of towns and villages, wherever possible, are presented without diacritics] marks, in the shape given by popular pronunciation and in the spelling prescribed by the official Tables of Transliteration, except where they form part of the titles of books; and the common terms (dc? Mag/d, hbdn: and co'j'os: kyaung: are given simply as Maya, pangyi, kyaung. About the Publisher Forgotten Books publishes hundreds of thousands of rare and classic books. Find more at www.forgottenbooks.com This book is a reproduction of an important historical work. Forgotten Books uses state-of-the-art technology to digitally reconstruct the work, preserving the original format whilst repairing imperfections present in the aged copy. In rare cases, an imperfection in the original, such as a blemish or missing page, may be replicated in our edition. We do, however, repair the vast majority of imperfections successfully; any imperfections that remain are intentionally left to preserve the state of such historical works.