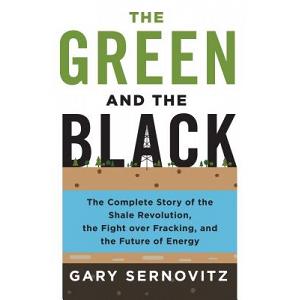 The Green and the Black: The Complete Story of the Shale Revolution, the Fight Over Fracking, and the Future of Energy

0 customer reviews | Write a review
Rp 534,000
No Hidden Cost
Or  1068 PEC Points
Currently Unavailable
If stock becomes available, email me at:
Delivered in :

Gary Sernovitz leads a double life. A typical New York liberal, he is also an oilman - a fact his left-leaning friends let slide until the word "fracking" entered popular parlance. "How can you frack?" they suddenly demanded, aghast. But for Sernovitz, the real question is, "What happens if we don't?"

Fracking has become a four-letter word to environmentalists. But most people don't know what it means. In his fast-paced, funny, and lively book, Sernovitz explains the reality of fracking: what it is, how it can be made safer, and how the oil business works.

He also tells the bigger story. Fracking was just one part of a shale revolution that shocked our assumptions about fueling America's future. The revolution has transformed the world with consequences for the oil industry, investors, environmentalists, political leaders, and anyone who lives in areas shaped by the shales, uses fossil fuels, or cares about the climate - in short, everyone. Thanks to American engineers' oilfield innovations, the United States is leading the world in reducing carbon emissions, has sparked a potential manufacturing renaissance, and may soon eliminate its dependence on foreign energy. Once again the largest oil and gas producer in the world, America has altered its balance of power with Russia and the Middle East.

Yet the shale revolution has also caused local disruptions and pollution. It has prolonged the world's use of fossil fuels. Is there any way to reconcile the costs with the benefits of fracking?

To do so, we must start by understanding fracking and the shale revolution in their totality. The Green and the Black bridges the gap in America's energy education. With an insider's firsthand knowledge and unprecedented clarity, Sernovitz introduces readers to the shales - a history-upturning "Internet of oil" - tells the stories of the shale revolution's essential characters, and addresses all the central controversies. To capture the economic, political, and environmental prizes, we need to adopt a balanced, informed perspective. We need to take the green with the black. Where we go from there is up to us.