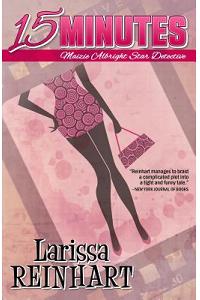 "Hollywood glitz meets backwoods grit in this fast-paced ride on D-list celeb Maizie Albright's waning star-even as it's reborn in a spectacular collision with her nightmarish stage mother, her deer-pee-scented-apparel-inventing daddy...and a murderer. Sassy, sexy, and fun, 15 Minutes is hours of enjoyment-and a wonderful start to a fun new series from the charmingly Southern-fried Reinhart." - Phoebe Fox, author of The Breakup Doctor series

"Maizie Albright is the kind of fresh, fun, and feisty 'star detective' I love spending time with, a kind of Nancy Drew meets Lucy Ricardo. Move over, Janet Evanovich. Reinhart is my new 'star mystery writer '" - Penny Warner, Author of Death of a Chocolate Cheater and The Code Busters Club

When ex-teen star Maizie Albright returns to her Southern hometown of Black Pine, Georgia, she hoped to rid herself of Hollywood tabloid and reality show hell for a new career as a private investigator. Instead, Hollyweird follows her home. Maizie's costar crushing, but now for her gumshoe boss. Her stage-monster mother still demands screen time. Her latest rival wants her kicked off the set, preferably back to a California prison.

By entangling herself in a missing person's case, she must reprise her most famous role. The job will demand a performance of a lifetime. But this time, the stakes are real and may prove deadly.