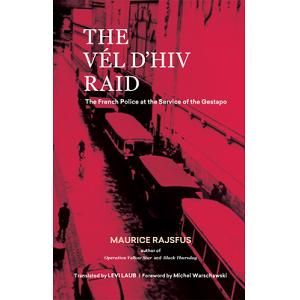 The Vél d'Hiv Raid: The French Police at the Service of the Gestapo

Beginning in the early morning hours of July 16, 1942, and lasting for two days, the French police went beyond Nazi ordinances and took it upon themselves to arrest and imprison more than 13,000 Jews at a Paris sporting arena, the Vélodrome d'Hiver.

For most of the Jews, this detention without water, food, or sleep was the first horrific step toward death in the concentration camps. Using recently opened police files, Maurice Rajsfus details the internal organization of the police, showing the mechanisms of this raid in particular and of raids in general, making the book an indispensable micro-history of the Holocaust. A uniquely detailed study of a notorious incident of cooperation between xenophobic and anti-Semitic forces. Shocking, large compilation of published articles in the collaborationist press that promoted social discord and hatred of Jews, distorted or obscured the raids on immigrant Jews in Paris under Nazi occupation, and used emotional appeals to nationalism to justify persecution. A companion piece to Rajsfus's Operation Yellow Star / Black Thursday (DoppelHouse Press, 2017), The Vél d'Hiv Raid, is the only contemporary analysis of the roundup, its precursors and its aftermath, including witness and police reports, shocking excerpts from the collaborationist press, and speeches by contemporary French politicians whose official apology is still not complete and terribly overdue.

With a foreword by Israeli activist and author Michel Warschawski.

Maurice Rajsfus (b. 1928), a former investigative journalist for Le Monde, survived the Vél d'Hiv roundup. He has written thirty books, including many examining the Vichy regime and its legacy in French police culture. Several of his books about his World War II experiences are the basis of a YA comic published by Tartamudo editions, as well as a theatrical production and a film. He lives in Paris with his family.